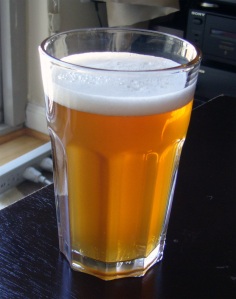 My excitement about this beer, which was probably very evident from my original post on it, was tamed a bit when I went to bottle and measured the FG. After correction, it was about 1.001. What was supposed to be a 4% ABV beer turned into about 5.3%, and with such a low FG I feared it would be very thin and/or a little boozy.

I would imagine this low FG is due to the extended mash, specifically the ill-advised extra 1 hour rest with fresh amylase at 63C/145F as was recommended in the instructions for the amylase formula. This particular amylase formula has beta-amylase, but being of fungal or bacterial origin I wasn’t (and still am not) sure it has the same temperature range as grain amylase. So, I went with the optimal temperature given, which in retrospect probably meant the optimal temperature for converting all starch and dextrins into fermentable sugar.

Bottled 8/3/13, exactly two weeks after brewing. FG was 1.001 from OG 1.042. Primed with corn sugar to about 2 vols. Yielded only 7 bottles from about 1 gallon due to excessive hop material in the fermenter.

I will definitely be malting and brewing with popcorn again. Its easy availability, good sprouting rate and low price make it very attractive as an alternative grain. I think it’s a good, though laborious, way to go for celiacs or anyone with an interest in brewing with things other than barley. As others have found before me, the hardest beers to emulate with other grains are pale ales. As such, I will definitely have to try other styles. Saison and Berliner Weisse stand out in my head as good styles to try in the future. I will definitely have to step up to malting 5 lbs. or more at once so I can make bigger batches, too. Next time I will also brew without any added amylase, but definitely keeping the complex mash.